How Brydge Works with NFT Collections

NFT Collections - moving off of Ethereum

NFT’s have seen a huge surge in volume over the last year as trading volumes hit new highs every month. The blockchain space has seen huge brands, projects, corporations and even celebrities enter the NFT space. Most NFT’s are minted, bought, and sold on platforms powered by Ethereum, but despite the liquidity that Ethereum’s network provides, there are still some major drawbacks that are pushing projects to different chains.

Some of the major drawbacks of Ethereum based collections are the low throughput, or processing rate of the Ethereum network caused by congestion when too many users are trying to interact with the blockchain at the same time. This is especially common with NFT collections and projects that have many users interacting at special times or updates of the collections. This can cause high fees that are paid not to the collection itself, but to the miners of the Ethereum network. 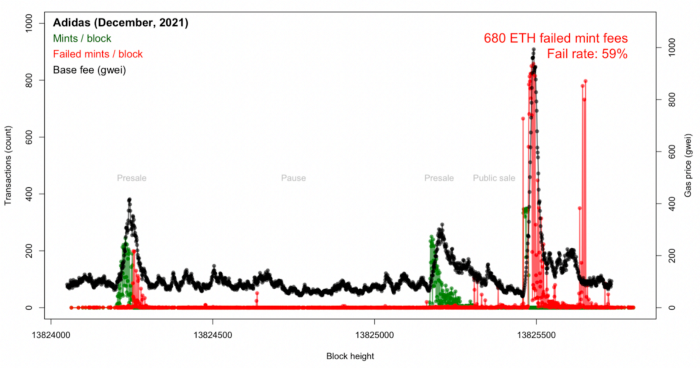 We have seen a lot of projects that have launched on the Ethereum mainnet only to have their minting process be incredibly inefficient because of the amount of failed transactions. With the excitement and focus on the minting itself, a ton of wasted value is being thrown into these mints and projects end up with an unhappy customer base and many scaling problems down the line.

The drawbacks of moving off of Ethereum

Ethereum, having existed since 2015, has the largest user base within the blockchain ecosystem. Not only do the number of users who own an Ethereum wallet or Ethereum based currencies completely dwarf the number of users of any other chain - but Ethereum also has a large amount of liquidity that is required for some of these projects to be able to grow and fundraise. Having the access and liquidity from Ethereum just simply isn’t something that can be easily given up on and many projects fail to mint out on other chains because there isn’t enough liquidity in those other chains. Users typically hold the majority of their assets in centralized exchanges or on the Ethereum network.

Additionally, the blockchain space is still new. For a lot of these sidechains, there are so few users that have wallets or are currently interacting with these side chains that reaching just a few 100,000 users is more than the number of daily users of the entire sidechain. There is a huge amount of friction in getting users over to certain chains and the hurdle of getting users to move off of Ethereum and to work on a new network is challenging.

How Brydge works with NFT collections

Brydge helps collections that plan to launch on a different chain to still be able to access the liquidity in Ethereum’s network. Users will be able to mint NFT’s on different networks while using tokens from the Ethereum main network. With Brydge, users are able to purchase a game’s assets on a sidechain while paying with tokens on Ethereum’s main network. Projects can access the liquidity of Ethereum while providing their users with access to a faster, more affordable network. 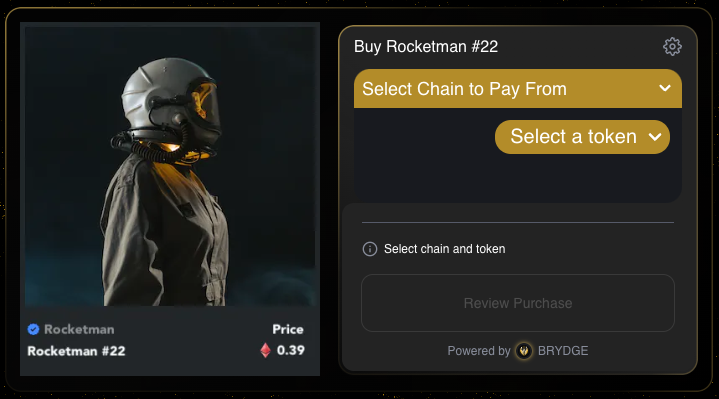 Projects no longer have to sacrifice a large amount of potential capital by choosing a different network to launch their NFT project. Instead, they can still mint and sell the NFT’s from Ethereum’s network, and avoid all the hassles, loses, and fees that come along with minting on the main network. If a user’s tokens do not transfer over in time for the mint, the tokens are not lost and massive gas fees are not paid by the user. Instead, the user will have the option to bridge back their tokens or interact with the collection or project on another mint or secondary marketplace.

How can we integrate with Brydge?

Brydge’s integration works the best with projects that are minting on their own website and not using a third party minting platform (such as OpenSea or mintable). In this case, the Brydge widget is simple to integrate and takes only a few lines of code to incorporate into the minting process. From there, users will be able to skip multiple steps in minting the NFT’s on a different network. For projects that are not running their own minting website and smart contract, but instead using a third party such as OpenSea, Rariable or another minting platform, we are working on building an extension for collections to be able to integrate into other minting platforms.

At the current time, we are working with Polygon and Ethereum based projects, but we have plans in the near future to add further chains and layer 2 solutions. Please follow our updates to learn more about the different chains that we are adding support for in the future!

Have any questions? Click here to talk to sales or here to check out our docs.

See a live view of your transaction from the moment you confirm in-wallet through finality. Partner dApps can now create custom alerts, giving your users peace of mind throughout their buying experience.